Skip to main content
Sarah Smith has been lifting up others since childhood
Lifelong service, leadership leads Alumni director to Phi Sigma Pi

Sarah Smith was born into service. Since childhood, the Phi Sigma Pi director has been giving back to her community in a variety of volunteer roles. 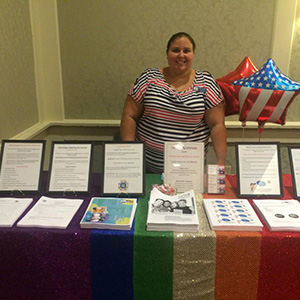 Sarah Smith seems to have been born with the Phi Sigma Pi mission already in mind.

“I’ve been sort of involved with service since I was a baby,” she said of her parents’ contributions to the Jaycees and other local community organizations. She even began volunteering for her first organization—Junior Girls Unit of the Veterans of Foreign Wars (VFW) Auxiliary—at the age of 6!

It’s been non-stop service, internships and leadership ever since.

She’s been part of the Fraternity since joining the Epsilon Alpha Chapter in the fall of her sophomore year at Kutztown University. Her graduation in 2013 came with a degree in secondary education with a concentration in English. 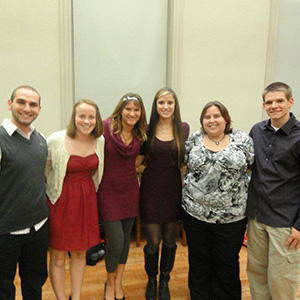 “My mom was a teacher, so it just seemed right,” she said. But five years ago, the teaching field was deeply competitive. “I had tons of interviews in four states; I applied to 200 places and had 30 to 40 interviews.”

She also was working part-time at Dutch Apple Dinner Theatre in Lancaster, Pennsylvania. She’d started there in 2009 as an intern while a senior in high school—in the box office, not on stage. “I like to do the behind the scenes in theatre,” she said. “I wanted to be a traveling stage manager.”

Smith said she saw her first Broadway show, “Cats,” as a little girl. “It stuck with me,” she said. Leaning toward musicals, she has many favorites including, “Hamilton,” “Hairspray” and “Les Miserables.”

“I watch a show differently than most,” she said. “I look at how they stage it, the lighting, how they choose to set a scene. … I’m the one who reads the tech bios in the program. Go techies!”

Today, still working at Dutch Apple, she keeps theatre as a hobby, which adds to her interests in volunteerism. 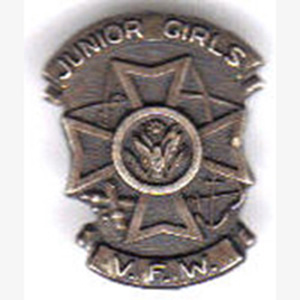 Smith said she was eligible to join the Junior Girls Unit to the VFW Auxiliary, with its own ritual, meeting and governing structure, because her grandfathers were WWII and Korean War veterans. Her involvement in the organization paid off in experience and in future educational opportunities. Smith served as state president for a year and won a national VFW scholarship when she was in 8th grade.

Ten years later she was old enough to join the VFW auxiliary, for which she has been a state officer and chair of many leadership positions. “I was 16 working hand in hand with 60 year olds,” she said, laughing, “I have learned so much from them.”

If this wasn’t enough, two years before graduating from high school, Smith took part in a HOBY Central PA Leadership Seminar … and she has been involved ever since. “It’s usually the same time as my birthday,” she said of the mid-May seminar date. “I’ve celebrated every birthday, since then, at HOBY.”

After high school, Smith continued as a HOBY volunteer because, she said, “I am passionate about teaching and developing young leaders. I love the ah-ha moments and seeing people be the best they can be.” 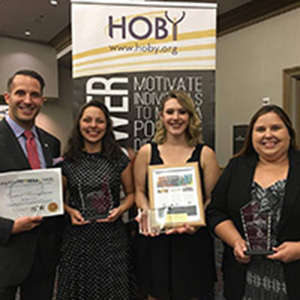 With HOBY, she has been Community Leadership Workshop (CLeW) director and vice-chair of operations. Here she learned about onsite logistics and event organizing.

“Learning leadership skills through VFW and HOBY gave me experience in marketing, the shared message and showing value of participating in these organizations.”

In the second summer after college graduation, Smith heard about an opening with Phi Sigma Pi. She remembers thinking, when she joined Phi Sigma Pi, in college, that it would be cool to work for the organization one day … and, there she was, in October 2014, as the Alumni Relations Coordinator.

“I couldn’t wait to announce it on social media,” she said. “It’s great to be working for an organization I was part of as a college Member.”

Smith said she is thankful for her education degree while working for  Phi Sigma Pi. “So much of what we do is writing, planning and developing programs. So, it all came full circle.”

In May 2016, Smith took on the creation of Leadership Academy and leading the Fraternity’s HOBY partnership. As lead in the Alumni Department, she works with a dozen Alumni Chapters, the National Alumni Association and the Chapter Excellence Board. She looks for volunteer recognition and opportunities … and developing new Alumni Chapters.

“I’m still teaching, just in a different way,” Smith said, reflecting on how much of her life is centered on helping others. 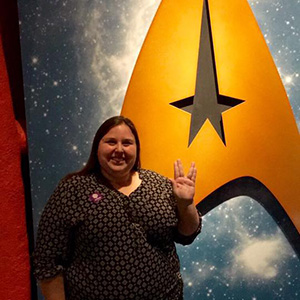 Smith is still a member of the VFW and, in June of this year, she will be a regional District President of the Auxiliary in Pennsylvania, overseeing the district meetings, conducting operational inspections of almost 20 Auxiliaries and representing the district on the State level.

Though Smith’s days are filled front to back and top to bottom with leadership and volunteer experiences, she makes sure to take time for personal passions, as well. Role-playing games (think Dungeons and Dragons), table top games and strategy games are a favorite, she said. She plays virtually, on a team of eight, four of which are Phi Sigma Pi Brothers.